Oh yes I did! The garden as a whole did ok this year, but the Nasturtium are going gangbusters. It’s been a busy fall but I had to take a minute to share this. It’s delicious and pretty, and would accompany a hard strong cheese just beautifully.
Blend your flowers and some oil and lime juice and see how much you’ve really got, before adding the rest. The flowers look like a lot more when they are whole.
As many Nasturtium as you can gather, others quantities relative to that.
Papita ( raw green pumpkin seeds)
Raw sunflower seeds
Olive oil
Lime juice
A fresh Garlic clove
Salt
Pinch of paprika (I like it hot)
I also froze some for a winter treat too! 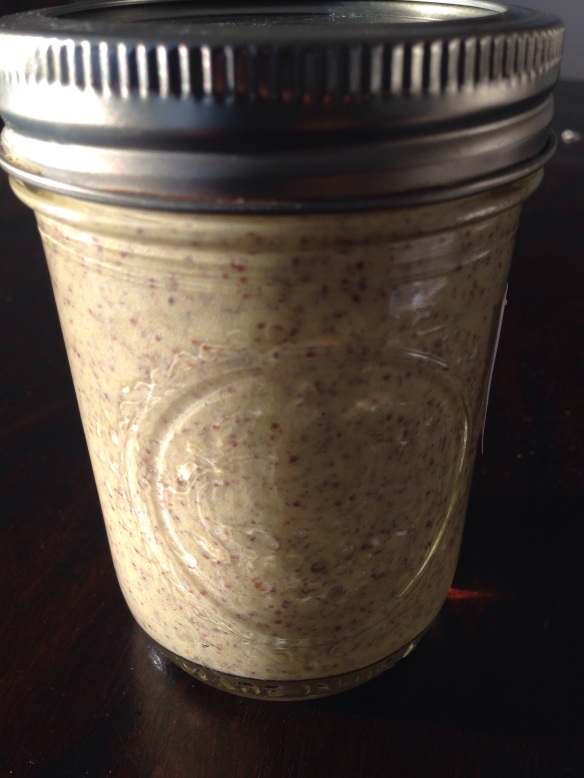 Now that I’ve made this whole grain champagne Dijon, I will be trying to make all different flavors. Not to mention that a $2.69 bag of mustard seeds makes about $50 bucks worth of gourmet mustard. I used just brown seeds and you can find them at Indian markets or finer grocery stores. I made a big batch so I could give some away too. You will need a large mouth glass jar and your stick blender.
1 cup Champagne or dry sparkling
wine.
1 cup cider vinegar
1 cup whole brown mustard seeds
1 generous teaspoon of sea salt
Put everything in your jar and let sit in a dark corner for 3 days. Then blend with your stick blender for about 7-10 minutes. You want the seeds to be just flecks and the mixture to emulsify. You’ll never buy mustard again. Keep refrigerated for months, but it will lose some of its punch over time so enjoy right away.

Bring to a boil everything but cabbage to make a brine. Add cabbage and stir until cabbage wilts into brine. Fill your sterile jars and hot water process for 15 minutes.
It only gets better with time. Try to wait at least two weeks. I’ve tried it as long as a year and it was excellent, but be very sure of your canning ability or store in the back of your frig.

They were ready just in time to make an interesting relish tray for our Thanksgiving dinner. Election night 2012, I was so nervous I couldn’t sit still and chopping vegetables always relaxes me.
In my vegetable drawer were some inglorious rutabaga and some candy stripped beets that weren’t getting any younger.
I pulled out the mandolin, sliced up each and then contemplated them in their individual bowls.
The rutabaga I decided needed to be adventurous so I sliced up some ginger and garlic and added it.
The beets got garlic and some leftover fresh thyme, and everything packed into wide month jars.
Then I set about to make my brine for both.

My basic formula is half cider vinegar, half water.
First briefly toast some whole coriander and pepper corns in your pot. Add about 2 cups vinegar and 2 cups water and about 1/4 cup salt and 1/4-1/2 cup sugar, and a bay leaf. This is for about 4, 16oz jars full.
I then added some Ethiopian Berbere Spice blend for kick. Bring to gentle boil to dissolve sugar and salt.
Pour into jars until vegetables are fully covered and then boil water process the sealed jars for 10 minutes.
Pickles can be eaten in 2-3 weeks but do get better with some age. If you don’t want to bother with the water processing, just keep them in your frig. 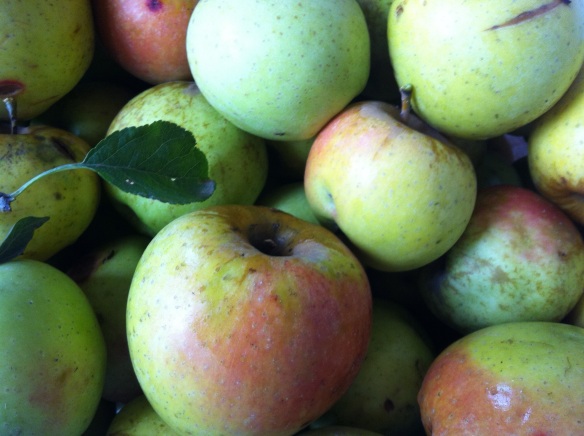 Along Melnea Cass Boulevard here in Roxbury MA, stand a handful of Heirloom Apple trees, the Roxbury Russet. Crisp, sweet and tart, they make great baking apples and yesterday I did a big batch of Spiced Apple Butter. It’s a great activity for a cold rainy day.
A couple of years ago I picked up some legit canning tools; just a jar funnel and jar grabber, but it makes it so much easier.
My amounts are again to taste because I’m doing about a bushel of apples, you could do a decent home batch with a dozen.
To do :
Wash, core and peel apples.
Roughly chop into about 1/8 pieces.
Put on stove at medium heat in double walled, or at least double bottomed pot.
Cover, stirring frequently until liquid starts to come up. Turn down to simmer uncovered for about an hour.
Use stick blender to purée and then add your ground spice. I used:
Mace, Clove, Vietnamese Cinnamon, Ginger.
Turn heat down to lowest possible and keep stirring frequently with stick blender, adding some sugar to taste. I only added about 2 cups for this bushel batch. Using the stick blender repeatedly gives the butter a velvety texture.
You know your butter is reduced enough when it mounds on a spoon and holds it’s shape. At least another hour.
I ended up with about 28 jars. 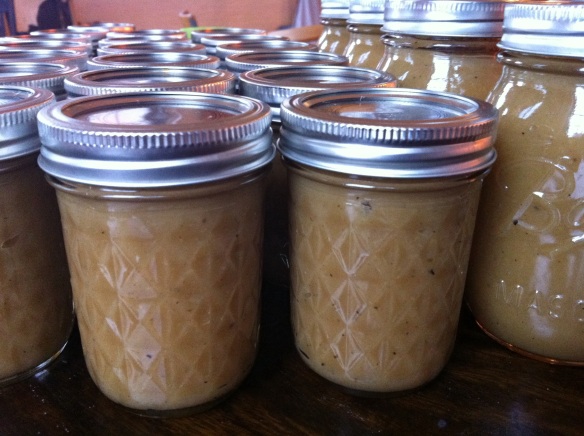 I just can’t stand seeing food go to waste. It must be somewhat leftover (ha ha) from owning a restaurant; I’m also a manic recycler. When I noticed a neighbor was not picking the pears in their front yard, I had to step in. After asking of course, I foraged almost a bushel of beautiful Red Anjou pears.
I love pear and cardamom together and I though this would be a great way to marry those flavors and have a variety of uses. The finished product is a deep maroon and beautiful on a cheese plate or with lamb or pork. My kids will be eating it on toast and waffles. I swirled it in some Greek yogurt.
To do:
Wash, de-stem and cut out any bad parts of really any kind of pear. Quarter them and start cooking on medium, I added juice of 2 lemons for my huge batch.
Keep stirring and when you start to see a lot of liquid, put on low, uncovered until pears are clearly breaking down.
Let cool some and then process through your food mill. If you don’t have food mill you’ll peel and seed them. Cooking with the red peels gave it the lovely color though.
You now have awesome unsweetened pear sauce and you could stop here! I almost did because I’m arms ached so much from the food mill.
Making the butter can be 6-12 hours on very low heat, or you could use a crock pot. You want to reduce it until it mounds on a spoon. I added some cinnamon and a lot of cardamom at the beginning and then more cardamom towards the end. I added some cane sugar since I was also going so heavy on the spice, but you needn’t .
Then get your canning supplies ready.
I’ll be taking some to my first visit to the Boston Food Swap.

The annual Peaches in the Night Preserved, batch starts now. To be unsealed at the Holidays for parties and hostess gifts. I do it the old fashion way, no pectin and a long slow simmer. I was wishing for a cooler August day, but oh well. I like what I read online about making jam and preserves is an art, not a science. The pectin and sugar content vary year to year, tree to tree. I use about half the sugar most recipes call for and add some lemon juice. I blanch, peel, pit and slice and then simmer for a couple hours after bringing to a boil. I’m making about 2 gallons of jam/ preserves. Maybe you’ll get to try some.

Oh my do I have battle scars from this weekends blackberry foraging. On my first hike up with the dogs on Saturday to my “spot” , low and behold there is a women picking MY berries! I was just planning on scouting how the crop was doing but luckily I had a bag and after a few polite words I started in on the harvest.
Having only shorts and flip flops on, I had to retreat and get better prepared.
After those crazy hail and thunder storms passed I went back up with the proper foraging attire on. Since she had picked all the easy ones I had to go even deeper then usual. I found some areas that seemed to be favored by some large animal, as all the foliage in front of the thicket was flattened! Hopefully Fifi the Chihuahua will always warn me if a bear is approaching. All in all I got about 7lbs of blackberried and found some new territory too. I’ve frozen the berries because I think I’ll have one more trip and then I’ll make the jam. To preserve the wild tartness I use half the amount of sugar as berries.
12 cups berries=6cups sugar.

Here is our almost 8lbs of blue booty. Everyone pitched in to gather this many yesterday. The heatwave should subside later in the week and there’ll be pie! You really can’t beat the America’s Test Kitchen recipe, it’s on their website. I’ll use their no fail Vodka crust recipe as well, but sub in 1 cup of Barley Flour for the awesome texture.
fourstarfarms.com for great unusual and small milled flours.
The rest of the berries go into the chest freezer for cooler days when we’ll make jam. Don’t let anyone fool you into jam kits. One less cup sugar per cups of fruit is all I do, or less if the fruit is good and sweet. You just have to boil it down a good long time in a decent double walled pot. Put fruit and sugar in the pot, bring to boil, simmer on low. Put a small plate in the freezer, you know your jam is done when you put a little on the fozen plate and tip it. If it’s real runny keep simmering. Small batches can just go into recycled glass jars in the fridge. If your going for a big batch like this, you do want to go through the whole canning process, so they’ll keep in the pantry.
Don’t be intimidated by getting into canning. Fruit us actually very easy. 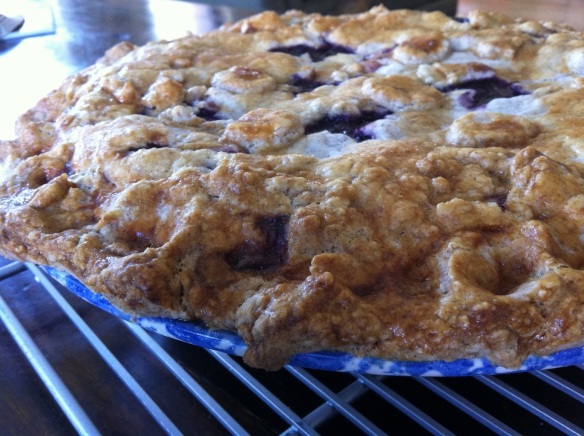